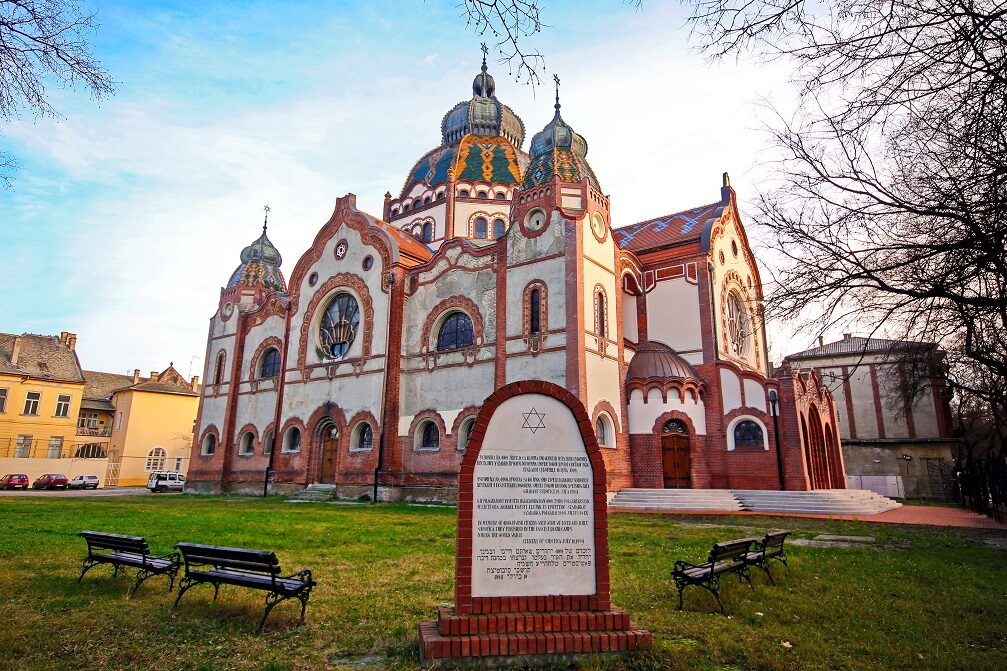 The synagogue in Subotica represents an unusual chapter in the course of Austro-Hungarian synagogue architecturalhistory and visualisatio nof Jewish emancipationin general,in Central Europe. It was constructed inacity officially called Maria Theresiopolis named after the Austrian Empress Maria Theresa, which was recreated after the liberation of the Hungarian Kingdom from the Turkish occupation.Christian colonists were settledto the devastated territory, the military buffer zone between the Habsburg and Ottoman Empires. By the 19th century these colonistswere Bunjevacs – a group of Croats –, Serbs, Hungarians and some Germans, Slovaks, Czechs)andfiveconfessions (Catholic, Greek Orthodox, Lutheran, Calvinist, and Jewish). Maria Theresiopolis was the official, ethnically neutral name of the town, in everyday life Croats and Serbs called it Subotica/Суботица, the others Szabadka.Szabad (free) referred to the status of these colonists, Subota to Saturday.

While living together without majorclashes, there were significant rivalries between these ethnic and confessional groups, in which the Jews had a peculiar position. By the end of the 19th century, assimilated Jews became here the exponents of the political aims of the host nation, the Hungarian majority and its culture vis-à-vis the nationalendeavours of local ethnic Slavonic population, the Croats (Bunjevacs) and the Serbs. The 19th century was the period of national awakening both of Magyars and of all other local ethnic groups, save perhaps the Germans who readily assimilated into Hungarians.For the Jews it was the period of giving up good part of their ethnic identity – language, customs, geographical separation in the context of towns and cities – and lining up behind a new and often controversial Hungarian identity.Thus, while Slavonic minorities opposed Hungarian national homogenization and relinquishing theirCroatian or Serbian ethnic identity, for the Jews Magyarization was more beneficial and less threatening, as their particularity remained untouched in the confessional realm, similarly to the religious identity of the Greek Orthodox Serbs. Jews were less sensitive to the loss of their native language, than Slaves, as it was not really native, be it German or Yiddish.

For the Jews,Magyarization was equal with emancipation, gaining civil rights and getting onto the stage of Hungarian economy and culture, hitherto largely closed for them. Thus, Jews sided with the Magyars in exchange for emancipation and they wanted to display their political loyalty and social achievements in stone and brick. The synagogue in Subotica and its architecture – references to Hungarian folklore, the presumed symbiosis of Jews and Hungarians –couldbe viewed in this context.

The synagogue’s location, its vicinity to the Main Square hallmarks the firm social position of the Jews around 1900. Moreover, its dominant octagonal dome challenges the primacy of church towers – Catholic, Greek Orthodox and Lutheran. Its innovative space conception and bearing structure broke new grounds in the country and hallmarked the enthusiasm of Jews for state-of-the-art technology and modernity in general. The Hungarian Art Nouveau style, called locally Secession, broke away from the tradition of Austro-Hungarian synagogue architecture and stood for the presumed Hungarian identity of the Jewish population.Interestingly, the synagogue’s architectural impact was remarkable. A whole range of public buildings followed its formal language in the city. These edifices not only changed the image of urban landscape, but the style, initially intended to be just Hungarian, became “supranational”, creating a regional architectural identity. The synagogue reflects this complex cultural identity with its “architectural Esperanto”, which is actually synthetic, artificial and historically rootless.

Hungarian Art Nouveau was often regarded in Budapest as a Jewish-like style due to its multifarious, playful idiom, unrelated to anything that had evolved organically in the course of architectural history in the Hungarian Kingdom. All these features and their social echo, as well as the construction history of the building require detailed analysis and provide the subject of this paper.