REVIEW: ORIENTALISM AND ART NOUVEAU IN LIPÓT BAUMHORN’S OEUVRE: THE SYNAGOGUES OF ZRENJANIN AND NOVI SAD 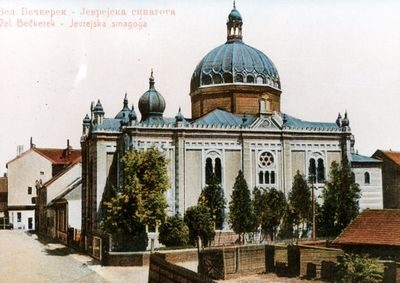 Two of the synagogues built in Vojvodina, Serbia, at the end of the 19th century and the beginning of the 20th century can be attributed to the same architect. The synagogues of Zrenjanin (the former Nagybecskerek, 1894–1896) and Novi Sad (formerly called Újvidék, 1905–1909) were designed by Lipót Baumhorn (1860–1932), the most engaged synagogue architect in Europe. His oeuvre, which was created over forty years between 1886 and 1932, embraces the phase of synagogue architecture when the mid-19th century Orientalism gradually gave way to modern currents. These two examples from the territory of Vojvodina illustrate the two endpoints of this process.

In my study, I mainly deal with the stylistic features of the buildings. Furthermore, I give an overview of the history of the Jews living in Zrenjanin and Novi Sad. Besides demonstrating the connections between structure and material, I focus on putting the buildings in a contemporary context in my paper. A comparison of the two synagogues and an evaluation within the architect’s oeuvre may answer whether the synagogue architecture followed the general styles around the turn of the century and, if so, to what extent did it retain genre-specific features.